If not for the occasional appearance in international headlines whenever Indonesia executes the drug convicts in the infamous Nusakambangan Island, the town of Cilacap in Central Java may easily be forgotten. It does serve as the main harbor for the prison island and many people merely bypass the roads and go straight to the harbor. Indeed, the sleepy town boasts little else than some beaches, and the domestic visitors often complain about the scorching heat. But a visit to a local attraction of Benteng Pendem (lit. The Buried Fortress) will reveal just how important this town was in the Dutch era when it served as a coast observation post to the passing vessels.

END_OF_DOCUMENT_TOKEN_TO_BE_REPLACED

From the jungles of Siem Reap in the midst of the vast Angkor Wat complex, I present you Ta Prohm. People may instantly recognize the images from Angelina Jolie’s “The Tomb Raider” film. This temple is small compared to the main Angkor Wat Temple, but it is magnificent in its own right. The forest is slowly taking over the structures by sneaking in its roots among the stones and crawling its way to the top. Of course there are concerns over the preservation of the heritage and the visitors’ safety. However, some people argue that such invasion could actually strengthen the architecture.

The mighty trees of Ta Prohm sits like cherry on top of the temple and they provide some shelters and cool temperatures. Besides, the photographers and photographer-wannabes will not be short of inspiration.

More takes on this week’s photo challenge can be found here.

According to sixtyvocab.com, there are around 46(?) different alphabets or writing systems in the world today. This is, of course, debatable, since I hardly believe that they counted all the complex writing systems that many tribes or groups of people still use in Indonesia, India, or Africa.

Thanks to Sukarno, our founding father, we don’t have to struggle with studying the Javanese Honocoroko or the Arabic-Malay Jawi scripts and learn Roman characters instead. But it is heartwarming to see that many regional governments in the archipelago are trying to revive the local scripts by putting them on road signs or government offices.

On a recent trip to Yogyakarta, I encountered a few signs written in both Roman and Javanese letters:

I guess we learn something new everyday, ey? 😀

Can you name the events depicted in these trio images from the books of John, Acts of the Apostles*, and Genesis?

“Rumah Tegel” (The Tile House) was a tile factory in Lasem, a small town in Central Java, Indonesia, whose products once decorated the residences of the royal families and wealthy merchants across the island. The factory is now defunct but visitors are still allowed to come inside and appreciate some of the artworks that the owner families left behind.

At a corner of the terrace, I came across these images that serve as decorative coating on the tiles. I was puzzled at first before recognizing two of the images. The first one is taken from John 8, in which Jesus was writing on the ground when Mary Magdalene was about to be stoned to death and He challenged anybody who considered themselves not sinful to step forward and take the stone. Meanwhile the third one is taken from Genesis 3, in which Adam and Eve were cast out of the Garden of Eden.

Now I know that the second image is taken from The Acts of the Apostles*, but the number is unreadable and I cannot really make out the scene. Can anybody help me identify it?

It was dawn on the day of Buddha’s birth, and the pilgrims and observers were walking towards the ceremony. I stood there from a distance, just admiring the three towers of Angkor Wat.

Oh Angkor, bring me to your stories of faith and inspiration.

Other takes on this week’s challenge can be seen here.

When it comes to paying careful attention to details, one of the finest places to do so is the Asian Civilisations Museum of Singapore. Salak Yom, an annual Buddhist festival in Northern Thailand was celebrated in a beautifully-lit room containing decorated bamboo trees. Salak Yom was originally a rite of passage of young unmarried women. Her skills in preparing for the decoration show her sense of art, capability, and thus her readiness to get married.

And those little pieces made me stand in awe. 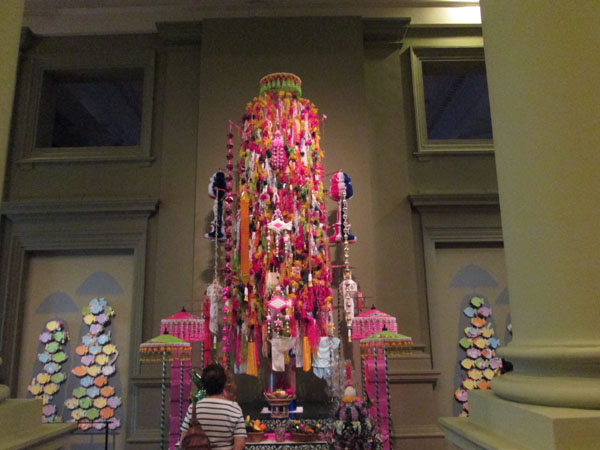 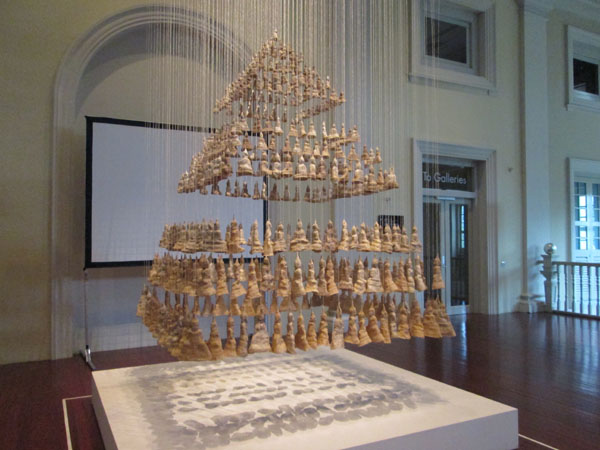 More takes on this week’s photo challenge can be found here.

High on the hills of Java lies the plateau of Dieng; a sacred ground to the Buddhists and Hindus who roamed the island long before the arrival of the New Religions. Up here, people live so close to the gods as the temples sit side-by-side with vast farmlands of potatoes, carrots, squashes, and tomatoes. Backing the prayers through its puffing ponds are the numerous craters which give vibes to the people and geothermal energy to faraway cities.

Life here is so free one can almost touch the gods by sitting inches to the craters with little or no boundary and letting your prayers go up and up. Here are the proofs: